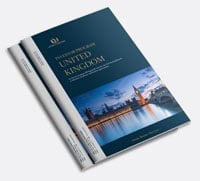 The United Kingdom, also called the U.K., consists of a group of islands off the northwest coast of Europe. It is a unique country made up of four nations.

Where is the UK?